A SPECIAL WELCOME TO FRIENDS FROM THE CHICAGO NEW TEACHER CENTER!

HARVESTING HOPE: THE STORY OF CESAR CHAVEZ
by Kathleen Krull, illustrated by Yuyi Morales (Harcourt)
On a ranch in the Arizona desert was a family thriving on eighty acres, until the great drought drove them all to migrant work. Though their crops may have withered, a seed was germinating in young Cesar Chavez. The indignities he experienced as a shy Spanish-speaking student and the grueling conditions are honestly portayed. Children will be stirred by these indignities, and their hearts equally swelled by the huelga, Chavez's peaceful movement against threatening overlords. His three-hundred mile march from Delano to Sacramento was the longest in U.S. history, and resulted in the first ever contract for farmworkers. This is an extremely powerful book that underscores the bravery and resolve it takes to engage in non-violent protest, and rightly puts Chavez on the same scaffolding as Martin Luther King as a champion of civil rights. The lush illustrations roll across double-pages horizontally set, thoughtfully designed as to emphasize distance: how far the people had to travel both spiritually and physically to achieve the goal. A page-turning read-aloud about an important chapter of Latino history that reads aloud as well to second graders as to eighth graders, this is a welcome and well done contribution to the shelves of children's biography. Viva la Causa! (All ages)
Posted by Esme Raji Codell at 9:00 AM 40 comments:

WANDA GAG: THE GIRL WHO LIVED TO DRAW (Wanda Gag) 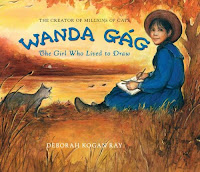 WANDA GAG: THE GIRL WHO LIVED TO DRAW by Deborah Kogan Ray (Viking)
Thought of as the mother of the modern picture book thanks to her scrappy 1929 tour-de-force MILLIONS OF CATS, Wanda Gag did not always have it easy, but she always had the drive to succeed. Using primary sources (as she did in TO GO SINGING THROUGH THE WORLD: THE CHILDHOOD OF PABLO NERUDA), the author captures the struggles of young Gag as she followed in the footsteps of her hardworking father. His imaginative dreams were thwarted by his need to support his family, but on his deathbed he fortells, "What Papa couldn't do, Wanda will have to finish." Most teenagers would have would have folded under the weight of caring for six young siblings and a sick mother, but the resourceful Gag not only gets her family through the hard times (two sisters became teachers!), but was published and earned a scholarship to study art in New York, where her creative genius began to truly blossom. This is a story that will truly inspire any creative spirit who encounters it, with lovely cozy-brown soft illustrations reminsicent of Don Freeman; you will have to resist pulling pictures out to frame (or maybe you don't have to resist).

The story is penned with a personal touch that allows the reader to warm their own skin against the heat of Gag's passion for art ("I can't help it that I've got to draw and paint forever; I cannot stop; I cannot; cannot, CANNOT...I have a right to go on drawing...") and to genuinely revel in Gag's accomplishments, especially in the face of such hardships. By the last page, any reader would want to be friends with sweet Bohemian Wanda, and bring a basket of ginger cookies to her as she draws in "a sagging farmhouse she called 'Tumble Timbers.'" It's exciting to read about somebody who put dreams first, even when it wasn't easy to do. (7 and up)
Posted by Esme Raji Codell at 9:00 AM 3 comments: And don't forget, in honor of Lincoln's favorite pastime, celebrate his birthday by starting a penny drive fundraiser for your school library!
Posted by Esme Raji Codell at 9:00 AM No comments: "My work has never been a labor, but an ecstatic delight to my soul. I have woked in my studio not envying kings in their splendor; my mind to me was my kingdom, and my work more than diamonds and rubies. If my encouraging words can help any struggling artist to have new hope, I shall be glad..." -Vinnie Ream

With so many men away fighting the Civil War, women were given new opportunities for employment, and fourteen-year-old Vinnie Ream took on work sorting dead letters in the post office. During her noon breaks, she slipped away to the Washington graveyards, cultivating her gift for sculpture. Realizing "I'll have to make my own opportunity if I ever hope to make art," she apprenticed herself out to a famous artist, who could not deny her talent. Soon Vinnie reputation spread, and she was able to sculpt the likenesses of haughty congressmen, always putting out into the universe and into their influential ears her dearest wish: to sculpt the face of the brave President Lincoln, whom she often saw walking among the people despite many threats of assasination. Her wish was eventually granted, but bittersweet. After the deed of John Wilkes Booth, Congress sought to hire a sculptor to create a memorial statue of President Lincoln. Could Vinnie's image of the president as a kind and gentle man compete with other visions of Lincoln as a warrior or saint? Would the bias against her age and gender stop her from giving the gift she wanted to create for her country?

Besides being a tribute to a woman who never gave up, this is an extraordinary story of friendship and admiration, of two parallel lives converging in a way that resonates through all time. The graceful writing in this book lends itself to smooth storytelling, and almost euphoric levels of inspiration.
Posted by Esme Raji Codell at 9:00 AM No comments:

WE ARE THE SHIP (Negro League ballplayers) "We look back and wonder, 'How did we do all that?' It's simple. We loved the game so much, we just looked past everything else. We were ballplayers. There was nothing we would have rather spent our time doing."

Imagine that you are child in the box seats of the great baseball game of history, and sitting right beside you, giving the play-by play, is a man who had been around the block and around the bases of the Negro leagues of the early 20th century, a man who wanted to whisper to you all the secrets, truths and legends of his day before it fades past memory; imagine that can really happen, that such a gift can be given, and you have a sense of the spell cast by this formidable book. The dust is stirred, the crowd is heard, and the crack of the bat and the sting of the mitt sings, sings, sings in these pages. Via first-person voice (which takes a little getting used to, but then becomes incomparably warm and confiding), readers discover a parallel sports universe, a dream manifested by some powerhouse business visionaries who created a league of their own, with rules that bent (six foot curve balls, sharpened spikes for sliding, umpires chased over center-field fences?!) and heroes that were larger than life. Descriptive and well-researched chapters celebrate the greats, Satchel Paige, Josh Gibson, Cool Papa Bell and beyond, and allow us to travel across the country with them as far as the Jim Crow flies, across the border to Cuba, and then, so bravely across the color line. Stoic painted portraits capture the serene beauty and almost loneliness of the field, the power of every sinewy muscle of the bat-swinging, ball-throwing arms, the dignity of every set jaw, and a double-page fold-out group portrait of the "First Colored World Series" will take. Your breath. Away. Nelson managed to match if not out-do the stirring visual tribute he gave in Ntozake Shange's ELLINGTON WAS NOT A STREET, and proved that his pen is as mighty as his brush. (And that's pretty mighty!)

A grand slam of sports history, African American history and All-American history, it's sure to sweep the ALA awards series and is the perfect gift for any baseball fan, but even more than that, it contains a piece of America that every child deserves to know. (8 and up)
Posted by Esme Raji Codell at 9:00 AM No comments: 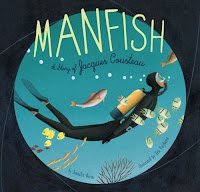 Posted by Esme Raji Codell at 9:00 AM No comments:

WHAT TO DO ABOUT ALICE? (Alice Roosevelt)

WHAT TO DO ABOUT ALICE? by Barbara Kerley, illustrated by Edwin Fotheringham (Scholastic)

"I can be president of the United States, or I can control Alice. I cannot possibly do both." -- Theodore Roosevelt

Plans were being made to send the irrepressible Miss Alice Roosevelt to Miss Spence's boarding school to become a proper young lady. "Alice was appalled. The idea completely shriveled her." But with a little consistent effort, Alice manages to get herself homeschooled. Let loose in the library, the dear little autodidact "taught herself astronoy, geology, even Greek grammar. She read Twain, Dickens, Darwin, and the Bible, cover to cover." But what better home to school in than the White House? As her father's career rose to the highest power, Alice (and her pet snake Emily Spinach) make the move to D.C. Her high spirits and propensity not to listen to her father made headlines, and a difference in what women started to think they could do...and what fun they could have doing it. The goodwill ambassador and serious party girl gets celebrated here in a way that will have little girls snorting at the poor little Paris Hilton. 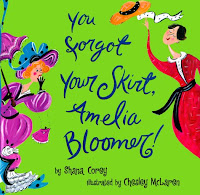 Some of the most charming pictures seen since McKinley's time happen here, and fans of Shana Corey and Chesley McLaren's YOU FORGOT YOUR SKIRT, AMELIA BLOOMER will appreciate the retro feel of the characters laid out with crisp, dynamic line and composition. Favorites pics include Alice having a tantrum with her head beneath a pillow, or zipping from shelf-to-shelf beneath a stuffy stuffed moose-head in the library; honestly, it makes me want to write something just so Edwin Fotheringham can draw it. What to do about Alice? Read about her days spent making the point: well-behaved women rarely make history. (6 and up)
Posted by Esme Raji Codell at 9:00 AM 2 comments:

Picture book biographies are one of the strongest genres in contemporary children's literature. They can be read aloud across the grade levels, and they don't take long to share. Many focus on peacemakers, visionaries and artists. So make a biography break a regular part of your reading routine! Here are just a few to get you started...

Esme Raji Codell
Welcome to the Wonderful World of PlanetEsme! I'm a professional readiologist™ who thinks children's trade literature and read-aloud is our best hope for equalizing education in America. I hope this book-a-day plan will be a boon to anyone who would like to play a supporting character in a child's reading life story. This blog is a supporting page to sister site PlanetEsme.com, where you will find a silly amount of additional reviews, thematic lists, links, and much more...everything you need to become an expert in children's literature.

A few of my heroes